One-of-a-kind footwear from the Bregenzerwald

We spend almost all day in shoes. We believe the expectations on these companions cannot be high enough. For four generations now, we have been creating wooden-soled shoes of the very highest quality. The unique character of the wood, leather and fur make every pair unique, whether boots, clogs or sandals. Our shoes are made at our own factory in Hittisau out of poplar or maple, and our heart and soul.

Alois Devich, originally from South Tyrol, opened a shoemaker’s in the Bregenzerwald. He soon made a name for himself in town with his wooden-soled shoes.

At 12 years of age, Alois Devich, Jr. was diagnosed with flat feet. He went on to make insoles that conformed to the shape of his feet and soon after began making them for his customers. From that time on, before the term was even coined, Devich, Jr. made ergonomic insoles. A minor revolution back then—a trademark of the shoes made by Devich now.

Anton Devich became the new head of the Devich shoemaker’s shop in Bezau. During his tenure, the business grew significantly, with more employees to help make shoes. With the expansion into industrial manufacturing, Devich was ready for the competition. And the future.

Daniel Devich has taken over the family business as the fourth generation. He runs the company with the support of his father and sister. Demand from abroad has become so high that the shoemakers were forced to move to Hittisau in 2016.

We make our wooden-soled shoes here, in the picturesque Lower Bregenzerwald. Some production steps are done by hand, others with the use of modern technology. And, of course, we only work with the highest-quality materials, from sewing thread to maple or poplar.

The difference is in the details. More precisely, in the insole

The insole has become the trademark of our shoes. Its ergonomic shape adapts perfectly to the foot not just for comfort, but for health: body weight is evenly distributed, concentrated pressure is avoided and a healthy posture is promoted.

A chip off the right block

We use poplar and maple for our shoes. These types of wood are specially suited to meet our requirements: Poplar feels pleasantly warm on the skin, is light and resistant to changes in temperature and humidity. Maple we prefer to use for shoes that are frequently exposed to moisture, since maple is highly water-repellent. But it is also heavier and cooler on the skin. As a sustainable resource, wood is also environmentally friendly.

We obtain our fur and leather from select and long-time partners. Our fur comes from livestock kept in natural conditions year-round, making our fur especially thick and rugged and making every pair of shoes one of a kind: Not one square inch is like the other.

Design: one of a kind

Nature is the hardest-working designer of our shoes. Thanks to the unique character of wood, fur and leather, every design is one of a kind. We create the shapes of our various designs ourselves with welcome inspiration from customer requests and feedback. We describe our wooden-soled shoes as “vintage rustic”. Despite their originality, our wooden-soled shoes can be combined with many other diverse styles.

Different skills, one goal: We want to offer our customers the best quality - in shoemaking and in consultation. 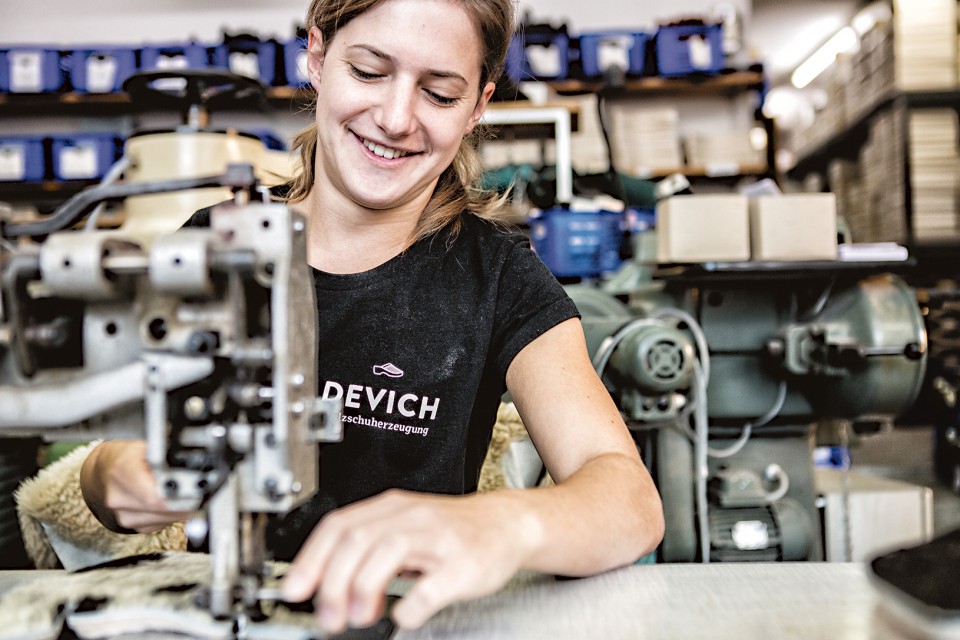 Clogs, boots, sandals: Despite the variety of designs, you do not have to agonize over a choice at our store. We place the utmost value on giving good advice. And on helping you find the right design for you.
Our store hours in Hittisau:
9:00 AM to 5:00 PM Monday through Saturday